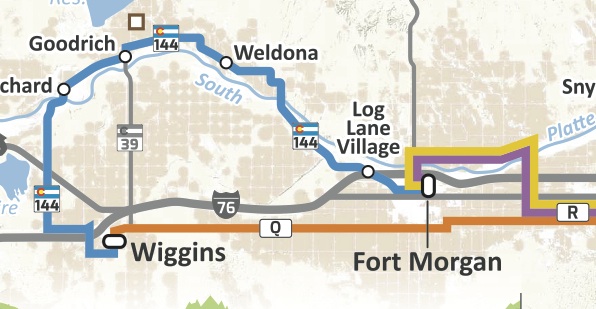 A meet and greet with a locally sourced brunch preceded the brief press conference announcing this year’s route. Gov. Hickenlooper and key partners including Dean Singleton, former publisher of The Denver Post and Viaero Wireless, the tour’s presenting partner for the third year running, spoke of the excitement surrounding this year’s event.

“Pedal The Plains is a unique ride that truly sums up what Colorado is all about,” said Gov. Hickenlooper. “It’s about people from all over the state coming together, being outside, exercising and exploring the state’s heritage and history. It is a great opportunity to explore the congenial communities along the roads less traveled.”

“We’re proud to partner with Pedal The Plains for its third annual tour across Colorado’s Eastern Plains, and we’re especially excited to showcase our own backyard,” said Frank DiRico, CEO and President of Viaero Wireless. “We look forward to connecting with our wireless users on the tour and providing exceptional 4G wireless broadband services.” Fort Morgan is home to Viaero Wireless.

Two stages of the 2014 bicycle tour follow along the South Platte River in the northeastern corner of the state. The 173-mile route will feature Jackson Reservoir, Pawnee National Grasslands, working farms and ranches, wind turbines and wetland habitats.

“This year’s tour coincides with Fort Morgan’s annual Fall Harvest Car Show and Sterling’s Sugar Beet Days, so participants will have many opportunities to experience the local flavor unique to these communities,” said Tour Director Chandler Smith. “The special offerings from all three hosts will make for a fun and festive time.”

As in years’ past, cyclists of all ages and abilities can participate in any of the three ride offerings including the 3-Day Tour, Century Ride and Family Fun Ride. Online registration is now open at pedaltheplains.com.
###