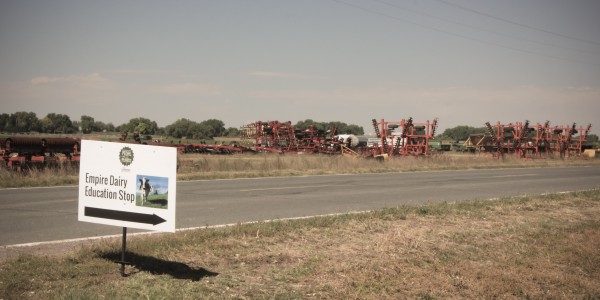 Numerous educational signs were planted along the route throughout the ride to educate cyclists about what they were seeing, hearing and smelling as they pedaled along. In case you missed a sign or two, here they are!

The route extended from St. Joseph, MO to Sacramento, CA. Riders were expected to complete the route in under 10 days. The record was 7 days 17 hours.

Horses were changed every 9 to 15 miles. When riders arrived at stables they would dismount, deliver the mail, and be on a fresh horse in less than 2 minutes.

Young men were often hired as the company had a policy that no rider be over 125 lbs.

“Bronco Charlie” Miller is said to have been the youngest rider of the Pony Express. He was 11-years-old on his first ride.

In 1861, the first transcontinental telegraph line in the US was completed and the Pony Express faded into history.

Buying local food and agricultural products gives you fresher food and helps Colorado’s economy, as well as local farmers, and ranchers in your area.

Since 1980, U.S. corn yields have doubled while emissions per bushel have decreased by about 40%.

Colorado’s corn production ranks between 13th and 18th nationally, depending on the year.

Colorado ranks first in the nation in millet production.

The United States provides about 25% of the world’s total supply of fresh peaches. Colorado ranks 6th in the nation for peach production.

Approximately 60% of the state’s $7.1 billion in agricultural cash receipts are attributed to livestock.

The Colorado Egg Producers Association was the first state Assn to develop an Animal Care Doctrine, showing their constant dedication to the well-being of their chickens

The Ogallala Aquifer is the nation’s largest aquifer underlying some 250,000 square miles stretching from Texas to South Dakota, part of which you will be riding over

More than 90 percent of the groundwater pumped from the Ogallala, is used for agricultural irrigation.

This amount represents about one-third of all U.S. irrigated agriculture, it creates about $20 billion annually in food and fiber.

While only 20% of the world’s farmland is irrigated, it produces 40% of our food supply.

The U.S. consumes water at twice the rate of other industrialized nations.

36 states are anticipating water shortages by 2016.

The South Platte serves as the principal water source for Eastern Colorado.

Denver was founded at the confluence of the South Platte and Cherry Creek.

The projected population in 2050 of this 22,000 sq miles is estimated to almost double in size to between 1.9 and 2.6 million people–creating a significant stress on water resources.

Attend the next South Platte Basin Roundtable meeting to get involved in local water decisions! Find a calendar at www.coloradowaterplan.com

Boo Bicycles are handcrafted using Iron Bamboo (tam vong) – bamboo that is stronger by weight than steel and that dampens vibration 4x better than carbon fiber.

Bamboo is one of the best absorbers of carbon dioxide on the planet.

The CHS facility has a holding capacity of 1.3 million bushels.

Much of the grain from this facility is transported by train down to the Gulf of Mexico where it is then shipped all over the world!

Crop dusting, or Aerial application, is the spraying of crops with crop protection products or fertilizer from an agricultural aircraft.

The first aerial application of agricultural materials was done by John Chaytor in 1906 in New Zealand by hot air balloon.

There are approximately 1,350 aerial application businesses in the US, 94% of the owners are also pilots.

The most common aerial application aircraft are fixed wing and can fly at speeds of up to 180 mph.

Welcome to Paoli, a town of 50, named after Pasquale Paoli, a Corsican patriot and leader.

Agriculture is vital to Colorado. Here are some fun facts about this booming sector:

Agriculture is one of largest contributors to the State’s economy, supporting more than 173,000 jobs in Colorado

Colorado exported nearly $1.8 billion of food and agricultural products in 2012

Colorado is #1 in wind manufacturing jobs, and top 3 in overall wind energy employment.

Wind turbines are massive. A wind turbine blade can be as long as 260 feet long and a turbine tower can be up to 328 feet tall — taller than the statue of liberty

More than 400 wind turbines dot the landscape of Logan County.

There are over 1 billion eggs laid in Colorado each year.

Cattle is Colorado’s number one agricultural commodity with 2.7 million head of cattle in the state.

There are 36,700 farms and ranches in Colorado.

Farmers and ranchers provide food and habitat for 75% of the nation’s wildlife.

About 73 million bushels of winter wheat are produced in Colorado each year.

One bushel of wheat can make 67 one-pound loaves of bread.

Colorado exports 80 percent of its wheat to 60 different countries.

“Learn to ride a bicycle. You will not regret it if you live.” Mark Twain

110,000+ Colorado jobs are supported by oil and natural gas.

Thanks to increased production in states like Colorado, the U.S. is now the world’s largest producer of both oil and natural gas.

~95% of all products we use daily are derived from or powered by oil or natural gas.

Chances are your helmet, water bottle, tires, pedals, grips, frame and even your spandex are derived from petroleum.

“Every time I see an adult on a bicycle I no longer despair for the future of the human race” H.G. Wells

The Overland Trail followed the south bank of the South Platte River through northeastern Colorado. It is said that the Overland Trail was the heaviest traveled road in America, maybe even in the world between 1862 to 1868.

The museum was opened in 1936 in the original building, which was made of native rock and designed after the early trading forts.

The Museum will be open until 7 P.M. Visit to find out more about the rich history of the Eastern Plains!

Each year during PTP Colorado Creative industries donates $1,000 to each host community to create a unique piece of public art

You know you’re a cyclist when: You’ve given a nickname to a bike

You know you’re a cyclist when: When camping, the bike stays in the tent

The first use of bows and arrows can be dated as far back as 25,000 years ago based on arrowheads found in Africa

When archers aim at a target 90 meters away, the size of the target is equivalent to the size of a thumbtack held at arm’s length

The park is a popular spot for bird watching, fishing, and other outdoor activities.

Local cyclists can take advantage of the 3.5 mile South Shoreline Trail along the reservoir

The Arapaho were part of the classic High Plains culture, living in tepees and hunting buffalo on horseback.

The Arapaho Indians allied with the Cheyenne Indians, and the modern Cheyenne-Arapaho tribes are based in Oklahoma

NE Colorado is a vital oil and gas region

Colorado supplies about 1 or every 50 barrels of U.S. crude oil

In 1988, Denver became the first U.S. City to require gasoline be blended with ethanol

Sugar Beet production has been an essential aspect of the economy of the plains since the beginning of the 20th century.

Colorado is 8th in the nation in sugar beet production

Sugar beets, a plant whose root contains a high concentration of sucrose, is grown commercially and accounts for over 20% of the world’s sugar production.

When fully grown, the sugar beet is a foot long and can weigh anywhere between two and five pounds

The town of Iliff is named for John Wesley Iliff, an early cattleman who owned a very large ranch in the area and is also the namesake of the Iliff School of Theology.

In June 2015 flooding knocked out the 8-inch water pipe into town, leaving residents without water for 22 days and drawing national media attention.

Welcome to Proctor! – Proctor was founded in 1908 by J.D. Blue Jr. – Although considered a ghost town, Proctor still has a handful of permanent residents and a cafe

Milk Facts: On average it takes only two days for milk to travel from the cow to the grocery store

On average, dairy cows produce 8-9 gallons of milk each day

The dairy industry (producers and manufacturers) creates nearly 10,000 jobs for Colorado resulting in almost $500 million in employee compensation and well over $3 billion in economic activity.

Colorado is 3rd in the nation for milk production per cow – because cows love living here too!

Chocolate milk is nature’s sports drink – it has the perfect ratio of carbohydrates to protein for optimal recovery. Get free milk at the end of today’s ride at the Western Dairy tent!

Are you lactose intolerant? Try buying lactose-free milk (which is real cow’s milk without the lactose) or taking a lactase pill before consuming dairy so you don’t miss out on the 9 essential nutrients.

The average farm in Colorado is 881 Acres

There are 36,180 farms and ranches in Colorado

Founded in 1928 FFA brings together students, teachers, and agribusiness to solidify support for Ag education.

To the left lies the Julesberg Reservoir. This popular fishing spot is known by locals as the Jumbo Reservoir

There are 6,000 students, in 100 school districts in Colorado, currently involved in FFA

This cozy and well-preserved architectural gem now offers B&B getaways and is filled with beautiful and original period pieces.

4-H’ers engage in hands-on learning activites in the areas of science, healthy living, and food security

There are many types of hay, including alfalfa, oat, wheat, and millet.

Beans are the only cultivated plants that actually enrich, rather than deplete, the soil during the growing process

Beans and the products made from them provide the most concentrated source of plant-based protein in the world. Between 6 and 11 percent of a cooked beans weight is protein

With facilities all over the mid-west, including one in Ovid, Kelley Bean Co is one of the largest originators and marketers of dry edible beans in the world.

The original site of the Fort Sedgwick lies 1.25 miles due south of this point

The fort, established in 1864, was known as Camp Rankin and later Post Julesberg before being renamed in honor of General John Sedgwick, a fallen civil war hero.

General Sedgwick was a courageous military leader whose last words are said to be: “Don’t worry boys, they couldn’t hit an elephant at this distance…”

The city of Julesberg has existed in 4 separate locations

In 1867, the transcontinental railroad reached Julesburg, causing a population explosion. Shortly after Julesburg earned the nickname, “Wickedest City in the West.”

Welcome to Julesberg! This city of 1,225 is the northernmost town in Colorado

See everything from an original first print of LIFE Magazine to Ford cars more than 100 years old- all of which still have a beautiful purr to their engines.

Don’t forget to stop by the Julesburg Community Garden located directly behind Kontny’s!

We hope you enjoyed Pedal the Plains 2015! We’ll see you again next year!