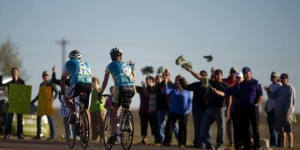 Pedal the Plains is returning to southeast Colorado after a three-year absence.

This year’s route, announced Wednesday, will take riders over 151 miles from Sept. 16-18, starting in Ordway and journeying through Fowler and La Junta before returning to the start.

The Denver Post Community Foundation-sponsored event — now in its fifth year — serves to highlight Colorado’s rural agricultural communities on the eastern plains to the event’s expected 1,000 participants. The event is less grueling than the harrowing six-day Ride the Rockies tour, now entering its 31st year, making it a more accessible event for casual cyclists.

“If you are long for places where your cell phone doesn’t work all the time, so that you have that quietness and peacefulness of riding through roads without a lot of traffic … you need to be on this Pedal the Plains route,” said Danelle Berg, Otero County economic development coordinator. “There’s a pride among rural people, especially in Otero County, to have visitors see our area.”

The event will showcase the area’s historic ranches, highways and agricultural landmarks. The past two years, the event has ridden through the northeastern part of Colorado. Read the rest of this article on denverpost.com