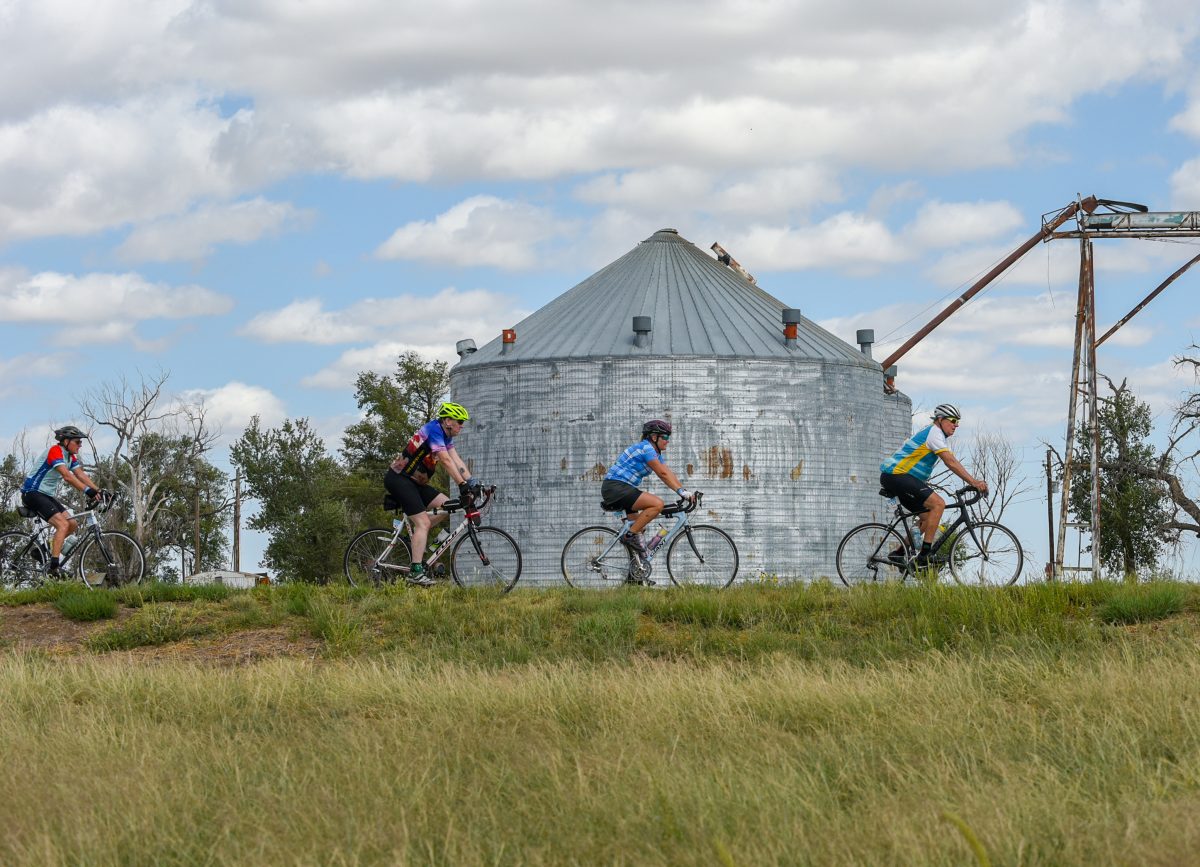 By Jason Sumner
I’ve spent the better part of two decades riding bikes in Colorado, but today was my first foray into the southeast corner of the Centennial State. I’m sure I wasn’t alone. Lamar, Holly, and points in between definitely aren’t on most cyclist’s bucket lists. But… maybe they should be.

No, there are no high mountain passes or spectacular red rock canyons like you’ll find in other parts of the state. But this little corner of the Eastern Plains that traces the famed Santa Fe Trail has its own unique beauty, which was on full display during day 1 of the 2019 Pedal the Plains. Also making an appearance were strong winds and scalding heat. More on all that later.

The sun-splashed Friday started in Lamar with a speeches and a ribbon cutting ceremony featuring Colorado Governor Jared Polis, as usual wearing sneakers, these emblazoned with the Colorado “C” logo. Very cool. Unfortunately he didn’t come along for the ride. Maybe next year. He’s definitely missing out.

After the pomp and circumstance, around 700 eager cyclists spun east away from Lamar for what would be a roughly 44-mile jaunt to Holly, the lowest city in the state at just 3,392 feet above sea level. Locals would be quick to point out that there are only 30 miles between Lamar and Holly. But the Pedal the Plains peloton stretched things out by riding through Holly and across the Kansas border to Coolidge, then spinning a 180 and rolling back to Holly. Thus the extra mileage – and the bragging rights of bagging two states in one day.

Those last six westward miles were also about the only time the wind was at our backs. The rest of day it was headwind or crosswind. Best to find some friends and share the workload. Or just put your head down and push. Who says riding on flat roads is easy? I don’t know about the rest of the riders, but I’m cooked.

Speaking of cooked, it was a cooker out there. At one point my GPS read 100 degrees. That’s probably a touch high (the result of the sun beating down), but it certainly got into the 90s — and stayed there. And there’s basically no shade on these roads. Hydration was key and reapplication of sunscreen was definitely recommended.

Also recommended was stopping at all the aid stations. Besides providing sustenance, they were a gateway to learning about the area’s local culture and history. Among the takeaways that stuck with me: Colorado produces 1.3 billion eggs annually, tiny bugs called weevils can help control the plant that produces goat heads (thus reducing flat tires for cyclists), and in the 1940s the 10th largest “city” in Colorado was the Amache Internment Camp, which held 7,500 Japanese American prisoners, and was located just west of the small town Granada, which is about halfway between Lamar and Holly.

Also known as the Granada Relocation Center, the camp is now a National Historic Landmark. It’s also a very sobering place — and just one of 10 internment camps that were spread across the western United States during World War II. The idea that this country’s government essentially imprisoned over 100,000 of its own otherwise innocent citizens simply because of their race is hard to fathom. The old saying that, “Those who do not learn from history are doomed to repeat it,” took on new meaning for me today. It was a really powerful experience to stand on those windswept grasslands imagining a scene that was less than 80 years ago. Let’s hope we’ve learned and it’s one that will never be repeated.

On a more upbeat note, this is a truly beautiful part of Colorado. Gently rolling farmland, fields of bright sunflowers, thick stands of oak and cottonwood trees, serenity, peace. There’s a hypnotic sense of calm and quiet hear. I’m glad I came.

And I’m excited to see more, which is just what’s on tap for tomorrow. A lot more actually. Saturday’s Pedal the Plains route has two options: a more direct south-west-south 74-mile spin from Holly to Springfield, or the more circuitous east-south-west-south 108-mile century plus option that includes extended time in Kansas. I’m going long.